Last year, I decided to start a yearly tradition… to re-create Norman Rockwell’s “Triple Self-Portrait” using what has happened to me in the year to populate the panel. Here is the black and white version of this year’s installment. Lots of detail. A color version will appear as a Sunday panel in the beginning of August. #tripleselfportrait #normanrockwell #tradition 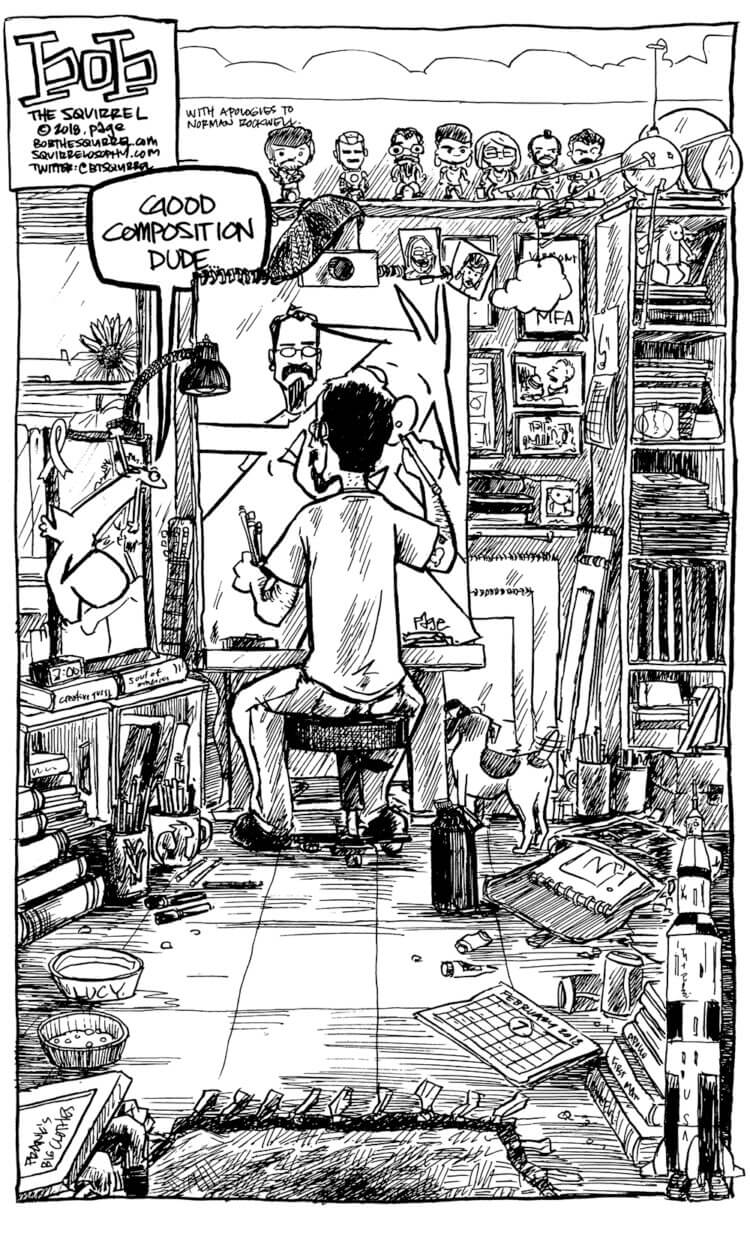 Here is the 2017 B&W version next to this year’s installment: 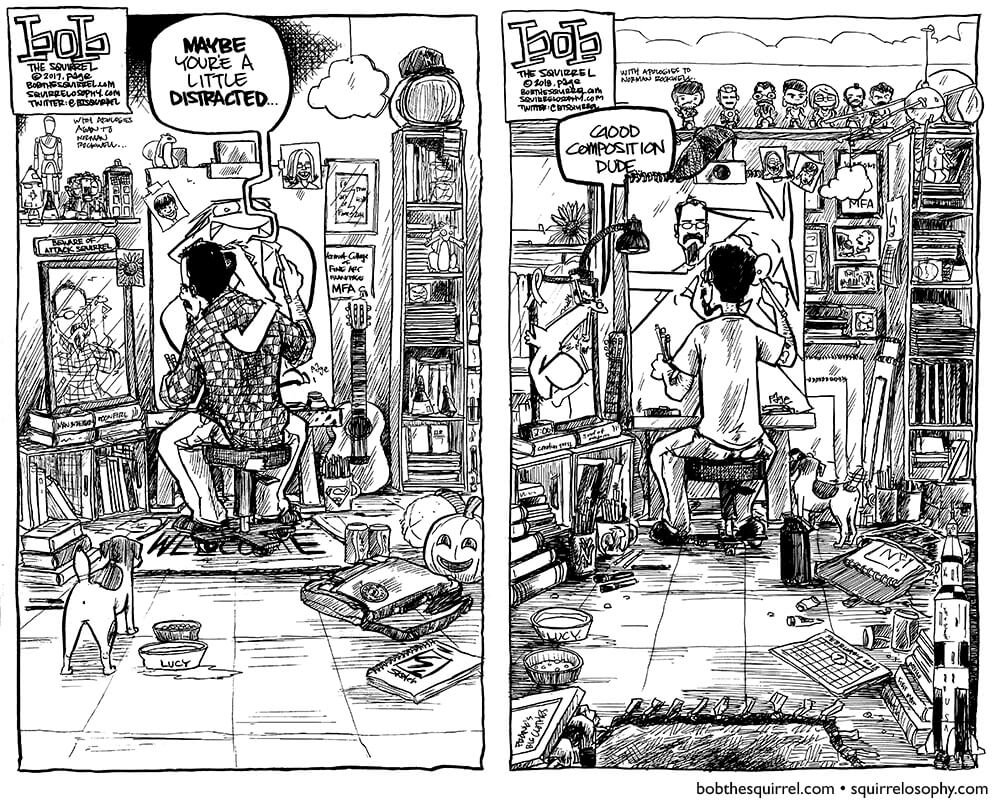 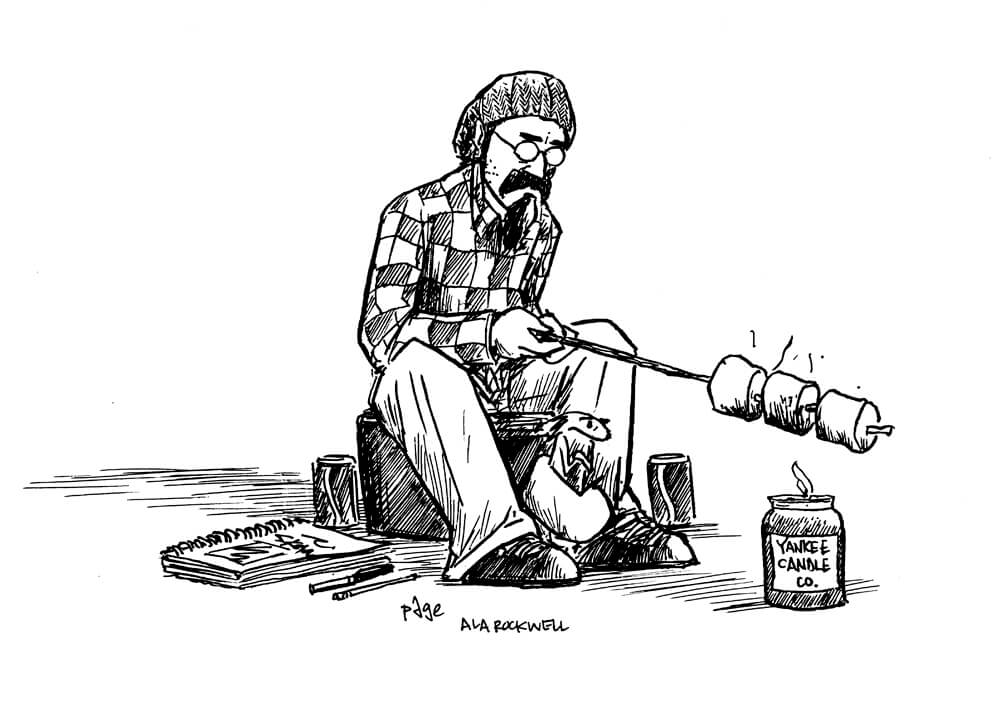 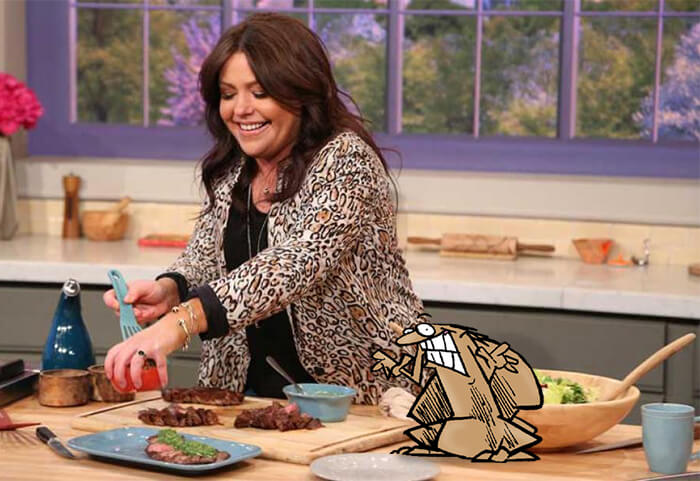 Rachael Ray, celebrity chef, guru and overall dynamo,  has been the object of Bob’s desire for over a decade.  What blossomed in 2006 , was still blooming in 2007 and 2008, continued on.

Bob continued his obsession at the end of the decade.  Things in my life were settling down.  We were all moved in to the new house, Lez, Lauren and I were becoming a real family.  And yet, I still felt the need to be a little passive-aggressive when it came to Bob and Rachael Ray.  And

It was around this time I actually had a shot of getting on the Rachael Ray show.  It got pretty far too… I was talking to one of her producers about being on their marriage proposal shows.  The premise would be that I was on the show talking about the comic strip… Lez would be in the audience.  She’d think she was there just to see that.  That’s when I would propose. (I managed to get a good proposal in later on)  On the show. In front of millions. I was nervous.  I was looking at rings.  This all came about and would come about in a matter of 10-12 days. I was in the running to be picked.

The producers then asked if I’d be willing to shave off my ‘stache and beard… essentially giving me a make-over. I (like an idiot) refused… and the phone never rang again. I take a few moments every February since to kick myself for being so foolish. I never told Bob.

Toward the end of 2009 I did a series of strips where Lez get Bob a Rachael Ray spatula for Christmas.  I thought it was a funny premise… watching Bob go nuts (sorry) over that particular item.  The strips were very funny.  Very funny.  I scanned & sent them off… and proceeded to work on the next story.  Another two weeks of strips finished. Boom… I’m on a roll.  It was only when the Rachael Ray strips were to begin running that I noticed a teeny tiny error.

I had managed to spell Rachael Ray’s name wrong.  In every. Single. Strip.

Going back and fixing it was possible, but not practical. I’d not only have to fix the spelling on the bad strips, I’d have to re-date the two weeks of panels I did AFTER these.  Three weeks of strips changed.  So, I let them run.  Enduring the emails about my error.  Know why?

Because I was going to a week of strips ABOUT the error.  Take that frown and turn it upside down.  Make fun of myself… because, why not?

Only problem was I had to crank them out in record time. Like two days.  This leads right into…

The benefit was I was now further ahead than I’d ever been.  In the grand scheme of errors ever committed by humanity this doesn’t even rank.  I used it.  I really poured the Rachael on in early 2010.  This made the Valentine story somewhat bleh.

Next up… new decade, same heartbreak. 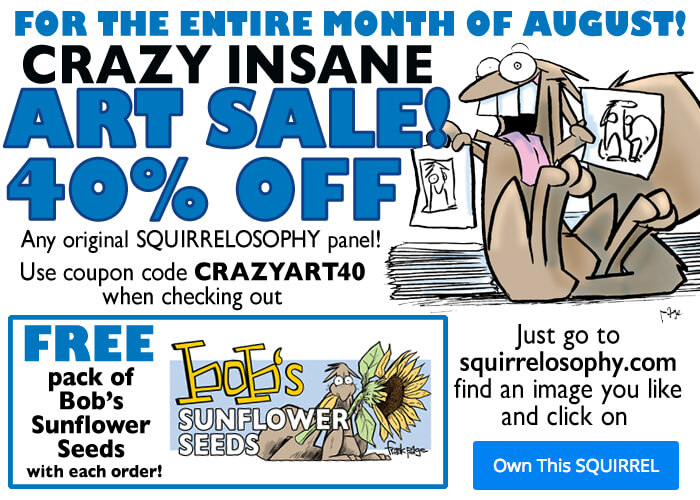 I’ve decided to sweeten an already great original art deal.  I will include one pack of BOB THE SQUIRREL SUNFLOWER SEEDS!  (limit one pack per order) These aren’t seeds for eating (although you’d have to fight Bob on that) they’re seeds for PLANTING!  These seeds were harvested from sunflowers I grew in my backyard.  They’re the ones I saved from you know who (Bob).

It may be a bit too late to plant them this year but you’ll have a great piece of art and a head start on 2018!

Click on the image above or here to grab some art and get some seeds!